On orders over £100 to mainland UK

Thousands of products on display

Architectural periods and how they influence your period home

When restoring your period home, it can be a daunting task to try and choose hardware and lighting that are from the appropriate architectural period - especially if you are determined to achieve an authentic restoration. What follows is a brief discussion of different eras from Georgian to Art Deco and how architecture was styled in that time. 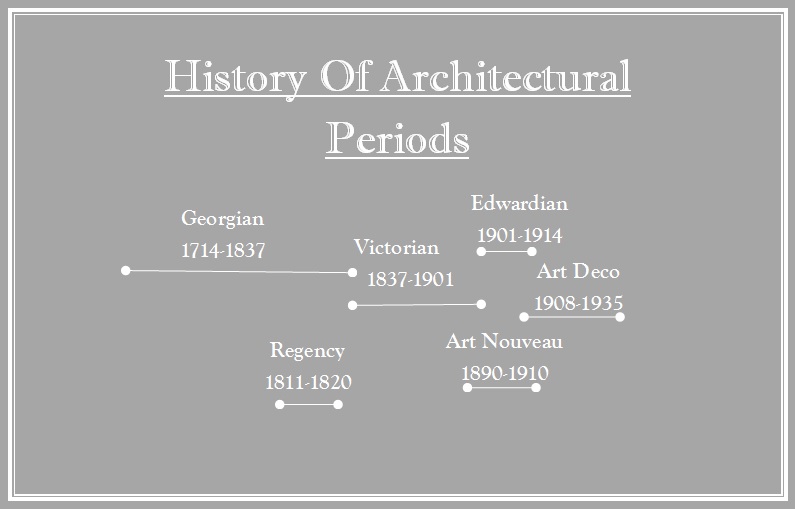 Georgian houses have certain characteristics, which can include:

Queen Victoria reigned from 1837 until her death in 1901. Architecture really started to change at this time, thanks to the new steam railways and being able to transport more goods. Welsh slate started to repalce a lot of tiles, and glass window panes got bigger as bigger panes of glass were made.

This era saw the first pedal bicycle invented; the first photograph taken in Britain; the first postage stamps and post boxes and the world's first underground railway (to name but a few!).

Characteristics of a Victorian home can include:

This relatively brief period covers the reign of Edward VII. During this time, an expedition to the Antartic located the south magentic pole; Charles Stewart Rolls and Henry Royce built their most famous car, the Silver Ghost; and Beatrix Potter published The Tale of Peter Rabbit.

Characteristics of an Edwardian house can include:

Art Nouveau is an international style of art, architecture and applied art, especially the decorative arts, that was most popular between 1890 and 1910. Many examples of this style can be found around the world including many buildings by Gaudi in Barcelona, Lindenbaum House, Budapest and Hotel Central in Prague.

Themes in this period would be:

Art Deco, or sometimes just referred to as Deco, is a style of visual arts, architecture and design that first appeared in France before the First World War. New materials arrived, including chrome plating and stainless steel. Bakelite was invented in 1907 and this opened up the door to moulded plastics and other materials.

Characteristics of an Art Deco building:

This site makes use of cookies for page view and eCommerce transaction tracking with Google Analytics. We also use cookies to keep track of your shopping basket, your recently viewed items, and your contact details at checkout. You can learn more in our Privacy Policy.